Vince, I have flown several times now with Greg. His RV-8 is powered by an IO360 angle valve engine that was hot rodded by Performance Aero Engines. He has a Hartzell 2 blade CS prop. It is the fastest RV around here.

Our 2 aircraft are identically matched. Same fuel flow for power setting and identical oil temps. At 25/25 our airplanes are identical in the climb. At 24/24 cruise we are still identical – TAS about 211 mph. This should answer some questions. With a 2 blade Scimitar prop my airplane would probably be a bit faster than his is.

It flies absolutely perfectly.  Looks like a Rocket and flies like an RV-8.  No CG issues at all. In fact, it came out up next to the forward limit with full fuel and pilot only.  I couldn’t be happier with it!  Performance is like an IO-360 RV-8 or better.

The concept is verified! 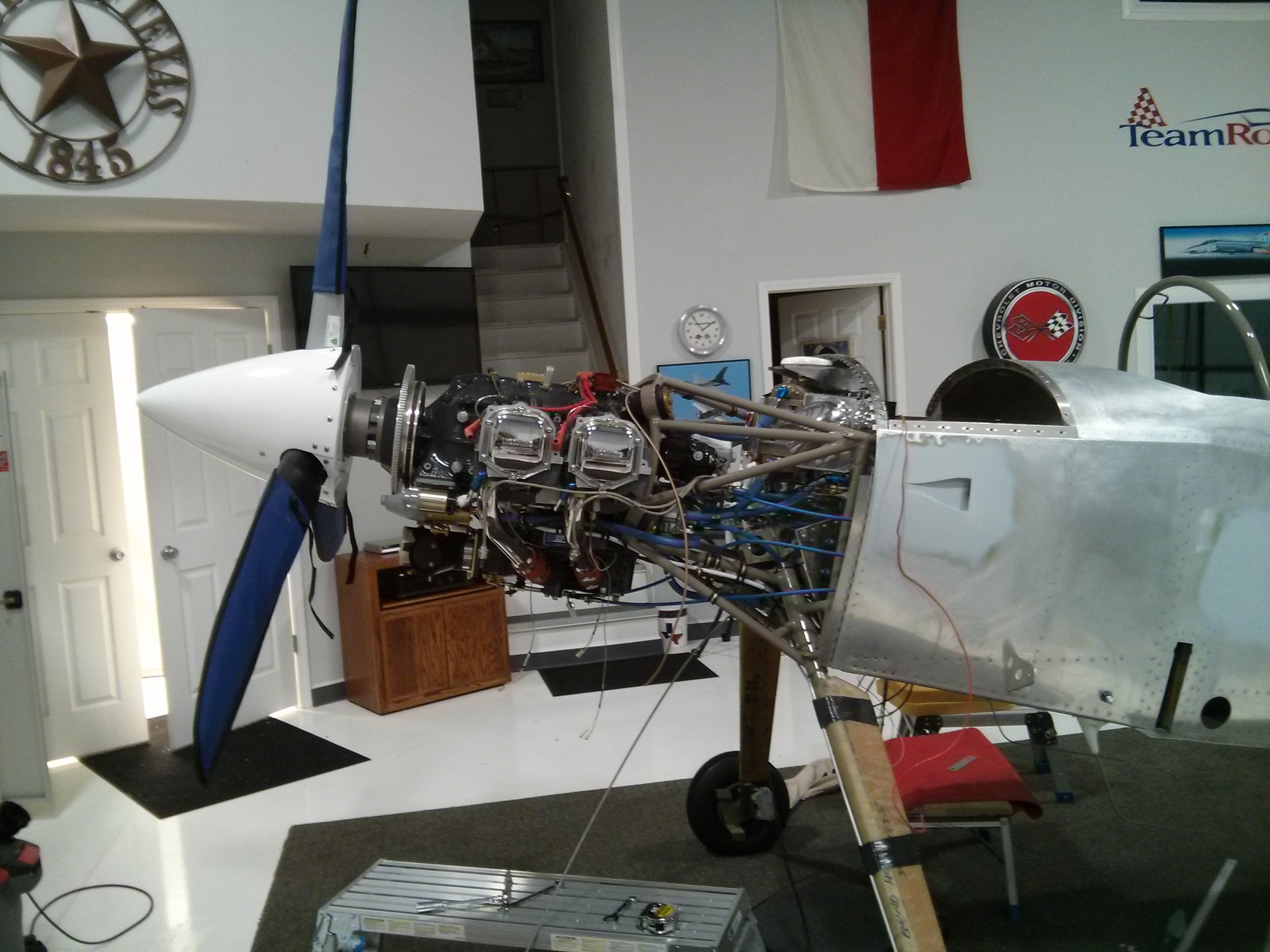 Brad Hood’s F4 Rocket II engine installationBrad also had this to say after flying it:   Appears to be comparable to an angle valve RV-8 and possibly a bit better. Frankly it feels very similar to my F-1 but roll stick pressure is much lighter. Again, like a RV-8. I am totally pleased with it!

HRII owner/pilot Larry V. swapped his big 6 cylinder Lycoming for a 4 cylinder several years back, thus proving the F4 Raider concept. Currently there are others under construction, including our own personal aircraft being put together right here in Southern Indiana. – Vince

Larry was kind enough to send the following comments regarding his 4 cylinder conversion:

” .… on another subject good luck with the (Raider) project.  It is a great airplane and after flying mine 275 hrs with the (6 cylinder) 540, and then doing the conversion to the (4 cylinder) 360, I would never consider going back.  Even Van (who produces the RV kits) himself chuckled and said ” I bet it flies like an RV now” (which is a HUGE compliment).

It’s still quite a ride, with half tanks of fuel it still climbs really well.  Some time back I flew against an RV-8 with the 200hp angle valve and I was 3-4 mph faster than he was, so that made my day.

One time I had an RV-8 in my hangar, nose to nose to my Rocket,  the -8 guy looked for awhile at the 2 planes and then pointed at the rocket and said “Ferarri”, then pointed to the RV-8 and said “minivan”.  We both laughed, and agreed.  Keep up the work.  It will pay off.

Here’s what my 4cyl. Rocket does and weight numbers.

Empty wt. reduced 150 lbs.  removed the large 35 lb. battery and cable from behind the baggage compartment and installed a PC680 on the firewall/rudder step. The rest of the wt. reduction came from engine, prop, baffling etc.  The prop is a Hartzell blended airfoil.